Ringu (1998) is a japanese horror film directed by Hideo Nakata. It was the most highest movie budget in japan. It is based on Koji Suzuki's novel.


Ringu (1998) is a japanese horror film directed by Hideo Nakata. It was the most highest movie budget in japan. It is based on Koji Suzuki's novel.

Ring (リング Ringu) is a 1998 Japanese horror film by Hideo Nakata, adapted from the novel Ring by Kōji Suzuki, which in turn draws on the Japanese folk tale Banchō Sarayashiki. The film stars Nanako Matsushima, Hiroyuki Sanada, and Rikiya Ōtaka . The film follows TV-reporter and single mother Reiko who is caught up in a series of deaths surrounding a cursed video tape.

Masami (Hitomi Satō) and Tomoko (Yūko Takeuchi), talk about a videotape recorded by a boy in Izu which is fabled to bear a curse that kills the viewer seven days after watching. Tomoko reveals that a week ago, she and three of her friends watched a weird tape and received a call after watching. Tomoko is killed by an unseen force with Masami having the horror of watching. Reiko Asakawa (Nanako Matsushima), a reporter investigating the popularity of the video curse, discovers that her niece Tomoko, and her three other friends, mysteriously died at the same time, on the same night, with their faces twisted in fear. She also discovers that Masami became insane and is in a mental hospital.

After stumbling upon Tomoko's photos from the past week, Reiko finds that the four teenagers stayed in a rental cabin in Izu. Reiko goes to Izu and finds an unlabeled tape in the reception room of the teenager's rental cottage. Watching the tape, Reiko sees a series of seemingly unrelated disturbing images. As soon as the tape is over, Reiko sees a reflection in the television and receives a phone call.

Yoichi and his father Ryuji met up in the street during a rainy day then Yoichi passes by leaving his father without a word. Reiko enlists the help of her ex-husband, Ryūji Takayama (Hiroyuki Sanada). They take a picture of Reiko and find her face blurred in the photograph. Ryūji then watches the tape, against Reiko's objections. Ryūji asks Reiko to create a copy of the tape so that he will examine it.

Ryuji was sitting alone in a bench and a woman with a white dress and a white shoes approaches to him slowly, watching Ryuji writing hieroglyphics in his notebook. The girl suddenly disappeared. Ryuji arrives to his home and found Reiko waiting for him. They went inside to the house to analyze the tape. Suddenly, Ryuji's student or girlfriend, Mai Takano arrives. Later in the studio, they find a hidden message embedded within the tape saying "frolic in brine, goblins be thine".

Ryuji phones Reiko that the message from the tape is in a form of dialect from Izu Ōshima Island. Later, they went to the library to research for the headlines about volcanic eruption until Reiko found one and the article is same as what seen in the video. The eruption in the video was reffering to the prediction of a young woman about the eruption of Mt. Mihara and it became true.

Reiko, together with her son takes a vacation at her father's house. That night, Ryuji phones Reiko that the woman in the mirror was Shizuko Yamamura. When they are asleep, Reiko encounters the towel man, pointing that her young son was watching the tape. Reiko catches her young son Yoichi, watching the videotape; claiming that Tomoko had told him to do it.

Reiko and Ryūji sail for Ōshima and discover the history of the great psychic Shizuko Yamamura, who was accused of faking supernatural powers; and thus committed suicide. When they arrived to the Yamamura residence, they discovered the mirror in the video which is still there in the room. They met Takashi Yamamura. They ask questions about Shizuko but Takashi ignored. Later that night, Reiko was begging to Ryuji that she die in his arms but Ryuji didn't wanted to.

Ryuji found Takashi staring at the sea. Takashi told Ryuji that their family is afraid of the sea. One by one members of their family will die in the sea. Ryuji told Takashi that he has similar abilities to Shizuko and Takashi runs away from Ryuji because he didn't want to talk about it. When Ryuji was holding Takashi's hand, he suddenly saw a vision from the past during the ESP demonstration of Shizuko. Reiko runs to them and she was transported to Ryuji's vision. When Sadako kills the journalist, she ran away from her family and holds Reiko's hand. Reiko's arm has Sadako's mark. Later, they where unable to go home because there was a storm approaching to them. That night, Takashi drove Reiko and Ryuji back to Tokyo even if the waves are strong.

With only a day left, Reiko and Ryūji discover that the videotape was made psionically by Shizuko's lost daughter, Sadako Yamamura, whose supernatural powers surpassed even those of her mother. The two go back to Izu with the assumption that Sadako is dead and her vengeful spirit (Onryō) killed the teenagers. They uncover a well underneath the cabin and through a vision see the circumstances of Sadako's murder by her father. They try to find Sadako's body in an attempt to appease her spirit. Minutes before her seven days are up, Reiko finds Sadako's corpse, and they believe that the curse is broken.

The next day Ryūji is at home and his TV switches on by itself, showing the image of a well. The ghost of Sadako crawls out of the well, out of Ryūji's TV set, and frightens him into a state of shock, killing him via cardiac arrest. Before dying, he manages to dial Reiko's number; she hears his last minutes over the phone and realizes the videotape's curse remains unbroken. Desperate to save her son, Reiko realizes that copying the tape and showing it to someone else saved her.

With a VCR and Ryūji's copy of the tape, Reiko travels with her son to see her father in an attempt to save him, realizing that this is a never-ending cycle: The tape must always be copied and passed on to ensure the survival of the viewers. 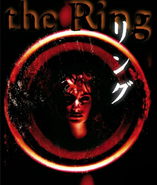 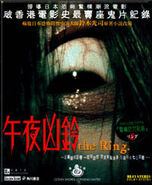 A rare still photo of Sadako

The conversation between Asakawa and Komiya the cameraman ends with Asakawa announcing that she will take the tape of that day's footage home in order to look it over.

Following the conversation with her aunt, Asakawa gazes over at the coffin of the late Tomoko, remembering her aunt's words: "They haven't once opened the casket to let us see the body. Don't you think that's strange?" Asakawa suddenly comes to, and notices that Yoichi is missing. She calls out to her father concernedly.

KOICHI: Huh. He was here just a second ago...

YOSHINO (cont'd) I happened to be out in that area when we first got word. The footage never made it on the air, though.

YOSHINO You'll understand when you see it.

Asakawa arrives at the house of her sister Ryomi. When Asakawa begins walking up toward Tomoko's room, there was originally a flashback to a younger Yoichi and Tomoko running down the hallway laughing, with a stern-faced Asakawa peering around the corner telling them to cut it out. The laughter, by the way, actually remains in the finished print -- if you turn up the volume, you can faintly hear it in the background.

In the movie Asakawa opens the unlocked door and walks in, while the script makes reference to her opening the door with a key that she has somehow obtained.

me tomorrow? It's important.

RYUJI With this equation, we'll just have "0" extending on into infinity.

RYUJI Hang on a minute, though.

ASAKAWA You shouldn't just leave your things lying all over the place, Yoichi. Have you eaten yet?

ASAKAWA Is it too much to ask that you take care of things when I'm not around? I don't exactly have a lot of free time, in case you haven't noticed!

Upon hearing Ryuji's explanation of why Yamamura Shizuko killed herself, Hayatsu pipes up that the only one knowledgeable on the history of the Yamamuras is Shizuko's cousin, Yamamura Takashi...and that he is hardly the talkative type.

Kazue the inkeeper hands Ryuji a faded photograph of Shizuko and Professor Ikuma, followed by this exchange:

RYUJI: What does Mr. Yamamura usually do in the mornings? KAZUE: Mornings? He always goes for a walk along the beach... RYUJI: Thanks.

This scene is slightly different from the scene as it appears in the film, beginning with the epithets that are being hurled. "We didn't come here to see trickery!" shouts one reporter. "You're being fooled, Professor!" shouts another. "Either that, or you're in on this whole charade." Also, Shizuko's line when the young Sadako makes her appearance is rather more ambiguous: instead of asking "Sadako! Was it you?!" Shizuko merely cries, "Sadako! Sadako!"

Asakawa arrives in time to see a squad car pull up, and the covered form of a body being hauled away. She races forward, breaking free of those that would stop her and rushing up toward the cadaver. She yanks the sheet back...and stands, rooted to the spot. The face of Takayama Ryuji is staring back at her.

The Hallway of his Apartment

MAI When I got here he was just lying there...

ASAKAWA Did he say anything to you? About a videotape?

He never even tried to touch me, you know. Not once.

MAI (cont'd) He said, it was because he could see inside people's hearts...

ASAKAWA (VO) Ryuji... Why? Does this mean that Yoichi will die, too? Is the curse not broken yet? Why am I the only one saved?

The identity of the figure with the towel over its head is revealed in the original script. In the scene where Asakawa returns to her apartment, she looks up to find this person standing half-hidden in the shadows, "its clothes the same as those last worn by Ryuji" (screenplay, p. 141). She even addresses this figure by name, crying out "Ryuji!"

There are two sequels shot in Japan: Rasen (also from 1998, aka Spiral) and Ring 2 (from 1999, and which was not based on Suzuki's works), as well as a prequel, Ring 0: Birthday (2000). There was also a Korean remake (called Ring in Korea and The Ring Virus abroad). A video game, known as The Ring: Terror's Realm in the U.S., was also released in 2000 for the Dreamcast. In 2002, an American adaptation was created, The Ring and gained a sequel, The Ring Two. The first film follows the original's closely although plot elements are altered or added in and Sadako Yamamura is reformed into Samara Morgan. A third film, titled The Ring 3D has been announced. {C}Some scenes in the Hong Kong film A Wicked Ghost are similar to it[citation needed]. {C}The international success of the Japanese films launched a revival of horror filmmaking in Japan that resulted in such pictures as Kiyoshi Kurosawa's 2001 film Pulse (known as Circuit (回路 Kairo?) in Japan), Takashi Shimizu's The Grudge (呪怨 Juon?) (2000), Hideo Nakata's Dark Water (仄暗い水の底から Honogurai mizu no soko kara?, literally From the Depths of Dark Water), also based on a short story by Suzuki), and Higuchinsky's Uzumaki (2000, aka Vortex, based on the Junji Itō horror manga of the same name). {C}Sadako 3D, based on Kōji Suzuki's 2012 follow-up novel S, was released on May 12, 2012.