Ringu 2 (リング2 Ringu 2?) (1999), directed by Hideo Nakata, is the sequel to the Japanese horror film Ring. Ring was originally a novel written by Koji Suzuki; its sequel, Rasen (aka Spiral), was also adapted into a movie as the Ring movie's sequel. However, due to the poor response to Rasen, Ring 2 was made as a new sequel to Ring, not based on Suzuki's works, and thus ultimately ignores the story of Rasen.

Ring 2 (リング2 Ringu 2) is the sequel to the Japanese horror film, Ring. Ring was originally a novel written by Koji Suzuki; its sequel, Rasen (aka Spiral), was also adapted into a movie as the Ring movie's sequel. However, due to the poor response to Rasen, Ring 2 was made as a new sequel to Ring, not based on Suzuki's works, and thus ultimately ignores the story of Rasen.

While inspecting the corpse of Sadako Yamamura, the forensic experts note evidence that Sadako has died only a year or two ago, meaning that she was still alive in the sealed well for almost thirty years. They later reconstruct her body and send it to Takaishi Yamamura (Yoichi Numata), Sadako's uncle, who takes it on his boat and later casts it into the bottom of the ocean.

Mai Takano (Miki Nakatani), Ryuji Takayama's assistant, continues to search for answers in regards to his sudden death. While searching for Ryuji's ex-wife Reiko Asakawa (Nanako Matsushima), she meets a reporter named Okazaki (Yūrei Yanagi) who is investigating the cursed tape in Reiko's stead. Okazaki, still searching for a person who has actually seen the tape with their own eyes, tracks down and interviews a girl named Kanae Sawaguchi (Kyoko Fukada). Although she has not yet seen the tape, she agrees to sell him a copy for ¥20,000. Upon giving the tape to Okazaki, Kanae admits that she watched the tape and begs him to watch it to spare her life. However, Okazaki is too afraid to watch it.

Okazaki and Mai visit a mental hospital to see Masami Kurahashi (Hitomi Sato), a friend of Tomoko Oishi's who saw her killed. Masami is now mute and refuses to leave her room, afraid of the TV in the lounge area. While there, they meet a university classmate of Takayama's, Dr. Kawajiri (Fumiyo Kohinato), who is a prominent paranormal researcher and recognises that Sadako Yamamura's lingering hatred resides within the tape and can be transferred to people such as Masami. Determined to remove Sadako's spirit from Masami, who has become imbued with psychic powers and can project the tape's images onto nearby TV sets, Dr. Kawajiri arranges a risky experiment based on his theories involving energy transfer. The experiment requires Masami to attempt to drain Sadako's energy out of her by projecting the images onto a blank tape. Mai warns Masami not to participate, but the experiment goes ahead. Images begin to appear on the TV when there is a massive energy surge and Masami collapses in her chair. Mai takes the opportunity to grab the tape and destroy it.

Mai finally meets up with Reiko Asakawa and her son Yoichi (Rikiya Otaka), both of whom have been in hiding out of fear from the authorities. Yoichi, having watched the tape, begins exhibiting psychic abilities and has become mute. Meanwhile, Kanae Sawaguchi's body is discovered. While trying to erase the footage of Kanae's interview, Okazaki finds that the tape won't erase, and the tape sticks. Kanae's face appears on the screen and slowly turning into a ghostly hair-covered face like Sadako's. The grinning Kanae comes closer to the screen and Okazaki screams.

Previously complicit in hiding the Asakawas, after seeing Kanae's body Mai informs the authorities, who close in on Reiko and Yoichi. At the police station, Mai utilizes her limited psychic abilities to tell Yoichi to flee. Yoichi regains his voice and alerts Reiko. They escape, but Reiko experiences a vision in which her late father appears. He tells her that "the child you carry with you isn't Yoichi anymore". Reiko is killed by a truck while experiencing the vision. The police arrive and Yoichi focuses his killing intent on one of the detectives for a moment, before Mai interrupts and whisks Yoichi away.

The next morning, Mai and Yoichi head for Izu, hoping for answers from Takaishi Yamamura. Dr. Kawajiri, who also experiments with spirit photography ("nensha"), arrives with equipment and is looking for Mai. Takaishi takes Mai to the River of Offering, and upon returning to the inn she and the doctor see a vision of Shizuko in a scene from the video tape, caused by Yoichi.

The next day, Dr. Kawajiri sets his equipment up next to a pool of fresh water which serves to sap Sadako's energies from Yoichi with Mai as a channeler. The process suddenly becomes chaotic when Yoichi's powers awaken. Takaishi, seeing Sadako's coffin in the pool, swims out towards it and is killed while yelling "Take me! End this with me!" The doctor commits suicide by electrocution under Sadako's influence, which also kills the nurse trying to stop him. Mai runs to Yoichi before blacking out.

Waking up, Mai and Yoichi find themselves in the well before both of them fall in. Ryuji appears, telling Yoichi and Mai to give him their fear in order to escape. Ryuji's grip leaves nensha marks on Yoichi's hand. The well's lid opens and the end of a rope is dropped into its depths. Mai climbs the well with Yoichi on her back when Sadako appears, wearing her reconstructed face like a mask, and climbs the wall, easily catching up to them. She asks them, "Why is it only you were saved?". Sadako then falls back into the well as Mai and Yoichi escape. Mai and Yoichi emerge from the well, only to find themselves in the pool used in the experiment. The bodies of Takaishi, the doctor, and the nurse float around the two as they reach the catwalk.

In the hospital, a nurse comes into a holding room to take Okazaki's picture before leaving. As the photo develops, her eyes widen in shock before looking back at the room. Behind Okazaki is the laughing ghost of Kanae Sawaguchi. 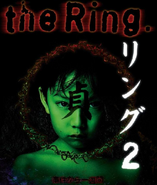 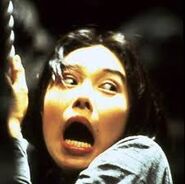